I’ll be going down a rabbit trail as I talk about our jacked up car. Please stay with me. I have a hard time telling brief stories.

So, last night, I went to a Chi-natti’s and had a fabulous time at an event with some of my very favorite people!! In normal Andrea fashion, I arranged to ride with someone. I don’t do it for the gas/money-saving, but mostly to have extra time with people who I get very little time with.

I was picked up in the mom-van by Amy, Celia, Jenny and Cortney. We were meeting Emily, Erin, Amy, Debba and Tela for apps, dinner and dessert (oh em GEE, GET the bruschetta and flourless chocolate cake.  Just do it and thank me later). But before all the gorging on too much good food and laughing, we had the ride down.

Caleb had practice last night so I told Paul I had a ride so instead of driving his car, he could take our van to practice with all three boys (yes, he’s an amazing dad to take ALL three children and allow me to do this stuff. I know). He left a while before I was getting picked up. But, I realized something as I looked out the door.

Paul always just pulls into our driveway, never backing into it like he’s gonna make a quick getaway or anything. Last night, he backed the car in. I thought that was odd. But, then I instantly knew why he did it.

I have shared before about how getting a new car for Paul is on our financial to-do list. We want to save money to pay cash for his car. It’s literally on its last leg and last week, that last leg start to wobble. He was on a business trip when he was backed into by another car. It was totally the other person’s fault. He got insurance information and that was that.

After the incident, Paul texted and told me what happened. To which I responded “NEVER text me something like this.” Then I responded with, “Are you ok? Can you drive the car home?” He was ok, and the car was, and is, driveable. However, I didn’t realize how bad it would be.

We only have liability on his car because, well, honestly it’s worth nothing so doing full coverage makes NO sense! Plus, we raised our insurance deductible. And, seriously, I’m not even sure the car is even worth the deductible at this point. But it runs and will likely make it through until we can pay cash for a new (to us) car. We hope.

He got home and the boys were all inquisitive about the damage screaming, “Mom, did you know someone hit Dad’s car? Did you see it?” To which I responded, of course I knew and walked out to look.

Now, as I also mentioned he has duct tape on his rear light (it’s red so it matches and all as you can see above). And he’s got his rear view mirror jimmy rigged up so it doesn’t, well, fall off in transit. But when I saw this humongous dent, I just said, “Babe, you really need to get that fixed.”

We talked about it and he thought the insurance would likely total out the car (and he just got new tires and the brakes fixed). Plus, he didn’t feel right even suggesting getting it fixed for the other insurance company because, seriously, it’s a junk car and we know it. And we knew our plans to get a car within the next few months. We’ve decided not to turn it into the insurance, knowing we’d not pay a dime since it wasn’t his fault.

On a side note, I wanted to get it fixed too because our niece may need a car. If it still runs when we get a newer car, and it’s reliable, she can use it too. But, what teenage girl would want to drive a car with a huge dent in the side. Well, I guess a teenager who wants a car would.

Getting back to last night.

When I got home, we talked about the food and how much I knew he’d love the pizza. Then, we got to talking about the car. I said “Did you back in so the girls wouldn’t see the car.” He said, “Yeah, I didn’t want you to be embarrassed.” I felt bad and proud that he’d take the time to consider my feelings (but not surprised because that’s the kind of man he is). Plus, I knew my friends would NEVER think anything given a few of their car stories (which are also ironically about Toyota vehicles, which is what our Camry is!).

I’ve NEVER been embarrassed of his crap car. Mostly because he has to drive it. I’ve been embarrassed for him because of his position and he probably had the worst car in the parking lot. To which he said, yes, in fact, he did. But, it doesn’t bother him anymore, he just wants the people who work at the company to do good work not be impressed with his car.

And, honestly, he’s wanted a nicer car. Not even a super duper nice car. Just one with a rear view mirror that he doesn’t have to worry about falling off and stuff :) I would just jokingly tell him to inform the people he’s driving around for work that, “Hey, the car is paid for. It’s falling apart. It runs. But it’s paid for.” Surely people could respect a family for wanting to do the best financial thing, especially paying cash, in full, for a need like a car. (I think they would).

Over time, he’s become ok with that. He wasn’t always considering he is the primary breadwinner in our family. And, honestly, the man deserves a vehicle he can be proud of (or at least one with working A/C). But, now he just doesn’t seem to care. He’s never ever been the type of person to care about any material things either (just to clear that up). But we both know that sometimes you are judged incorrectly for material possessions when we all know life isn’t about that. But, it’s also gotta be a little better than a duct tape taillight car too, right?

And, actually he has said he is driving this until we have the cash, as our original goal has been, to get a newer car for him. And, I’m glad because I’m not a magician and can’t just make money appear. I am, however, focusing on being more diligent about the many ways I save in order to pinch more to save for our car. Given this incident, we’re on an accelerated saving plan now!

You’ve heard that a time or too here, right??!! We’re saving on what WE need to spend but this time it’s for something we ALSO  need. We’re not concerned with what others think either, especially over a car.

I will be very honest and admit that I’ve looked at a vehicle and made a judgment both ways. A really nice car, you think they have money. When they could be swimming in debt. And, a jacked up car as we own, and members of our family own, maybe they have very little. Both stereotypes are wrong for the judgment and the thought. Hello, Millionaire Next Door (well, not next door to me. Or maybe they are since no one acts like it).

Through time, and a lot of maturing, I realize that appearances are flawed (oh, and, DUH we’re not supposed to judge).

So, what would you think?
When/If you see a person driving the jacked up car we have?

I hope no other jacked up car owners take any offense to this post. Obviously we know it’s not a priority. I’m making light of this, and thought that the situation that happened was a perfect example of how we are so aware of the judgement and perception of others. And, for the record we don’t care what anyone thinks about us or our cars :)

Last updated: October 1, 2017 We have gone from being paid every week to strictly on a monthly…

Monthly budget template to help you stay on financial track! These budgeting tips for families are simple to…

An Emergency Fund Savings account is so important! If you’ve ever experienced an unexpected job loss like our…

Most of us at one point or another have faced a potential job loss. With the government shutdown,… 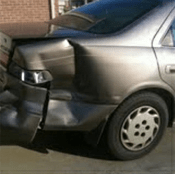 Andrea and Paul, Congratulations on your marriage! While it seems like you two love birds have been together…

Data excites me. I love to slice, dice, analyze and everything else to the data to find information….