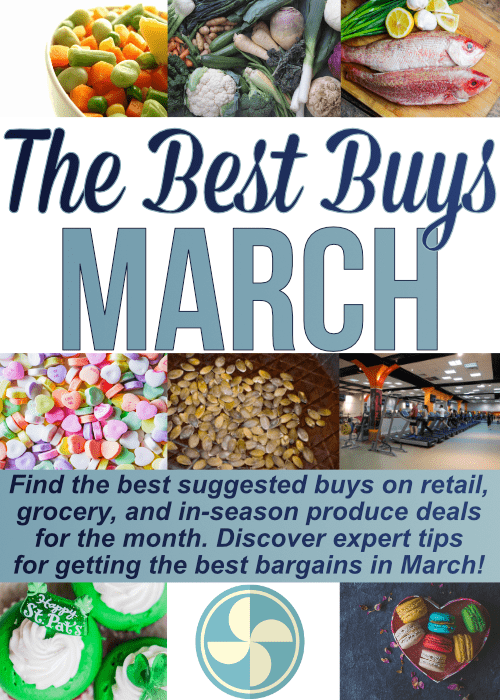 With the March temperatures beginning to warm up, Spring starts to become a bit more realistic to those of us aching for summer. Loads of winter items will begin to go on sale and chocolate lovers across the country will sing in unison as they find Valentine’s Day clearance sales in early March. Here are some things to look for in the month of March:

A quick word about buying large televisions. When you go to the store to buy a television, make sure you look at the input/outputs and what various hookups are available. Many people go in March to buy televisions and that is a good strategy because many of the newer models are getting ready to debut. That said, televisions can be tricky.

For example, I had a friend that got a great bargain on a larger television only to find out that it couldn’t hook up with a computer. She was buying the television in large part to use it as a bigger monitor for her computer so that was a bum deal. While ninety percent of the newer televisions have this feature, hers did not. She got burned because she didn’t look. Always look at the hookups.

March is a chocolate lover’s dream as I mentioned above, and it is not just because of Valentine’s Day clearance. You can find all kinds of wonderful chocolate deals in the month of March. Also, keep an eye out for great deals on frozen foods. March is National Frozen Food Month so bargains should be aplenty.

One thing to look out for that is not common all over the United States is cotton candy onions. These wonderful, delectable treats are in season starting in March and they are worth the extra money you pay for them. If you want an onion that has a divine sweet flavor along with a bit of a bite, then hunt down some cotton candy onions this March. You can thank me later.

By this time, gyms are desperate for people to join up and they will run all kind of specials (much like I noted in February). Another big item to prepare for is seeds for the coming garden. If you are planting, you will likely get started in the next month. Buy up your seeds before they spike in costs. It is still early enough to find some good bargains.

Mid March brings Saint Patrick’s Day so look for clearance sales after the 18th or so. It is always wise to buy up clearance in advance of the following year to save cash. Just a quick trip to the store can work miracles for your budget if you go when things are going to be at their cheapest, right? Don’t forget the first day of spring is March 20!