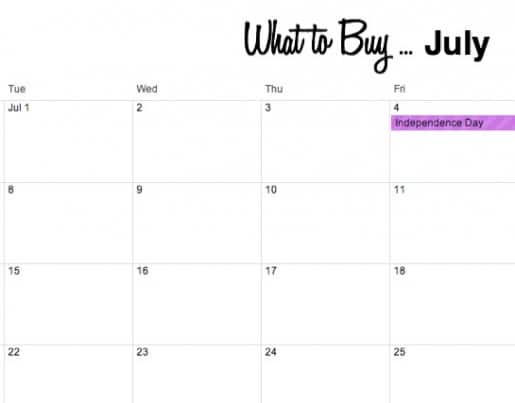 July is somewhat of a celebratory season. This is the month in which Independence Day is celebrated as well as one of the most popular wedding months of the year. Because of this, you can catch some great deals on unexpected items related to these celebrations. Just about anything related to a cookout will be on sale, as will home décor and a few other scattered items.

Keep an eye out for anything used outdoors. Often, these items will go on sale toward the end of the season so that stores do not have to return unsold items. This includes any kind of items used for a cookout, beach time, or a picnic. Any items that might be used for bridal gifts or in a wedding will also be on sale, as will Fourth of July materials once the holiday has passed. You might as well stock up for the following year..

July is the peak of cookout season and it also happens to be National Hot Dog Month, so expect some great deals on anything that can be used in a cookout. Grocery stores tend to buy these items in bulk because they sell so quickly, but that also means they want to get them off the shelves quickly. This means lower prices for you. If you have a deep freeze, this is a great time to stock up on cookout items.

July and August are great months for berries and melons. Though corn isn’t ready yet, the saying goes “knee-high by the Fourth of July” in reference to measuring how well your corn is growing. Because some plants tend to keep producing if they are picked often enough, you can expect a steady supply of berries as the plants are picked over and over.

One reason that computers and software go on sale during this time of the year is because people are outside more often. This means they are not as apt to be shopping for PC games and computers like they might during the colder seasons.

Furniture goes on sale during this time because July marks the end of the season for furniture manufacturers. They want to get rid of last year’s item so they can be replaced with the new year’s items in August.

Bicycles and motorcycles have been going on sale because people are not spending as much as they used to. If sales don’t pick up by July, dealers are eager to do something about it.

Now is a great time to stock up for next summer as well as get ready for the school year. Many items go on sale just so the stores don’t have to spend the shipping to return them to the manufacturer. Patio sets and other outdoor furniture will be drastically marked down in July, as will beach wear.