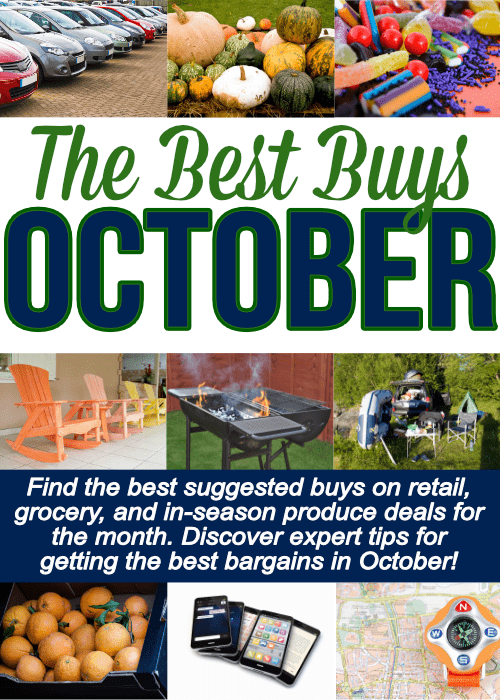 As October moves in, temperatures begin to drop and folks start looking forward to the upcoming holidays. If you aren’t one of those people who has been doing holiday shopping all year long, this is a great time to get started. Holiday markups aren’t in place yet, and you’re likely to get better pricing now than on holiday sale pricing later. As far as sales, you may be surprised at what you find in stores during October. While it is not typically known as a shopping month since it falls between back-to-school and the holidays, October is actually a great month to find deals:

Because October is a month during which changes are happening, you will save a great deal of money on items in stores from the past seasons. This means summer items like grills and air conditioners, sandals and sunglasses are going to be marked down to make room for holiday items. Take advantage of the new model car year and purchase the current year model at great savings!

October is known for Halloween candy and the fall treats that begin showing up during the month. Whether you are planning on a hay ride with hot apple cider or want to give the trick-or-treaters a special treat, October is a great month for grocery deals.

There is a reason why fall foods tend to revolve around late crops. They are fresh and ready as the cooler weather moves in. These heartwarming meals are nourishing and quick for most cooks.

October is an off season for vacations which means you can get great deals on airfare, lodging and rental cars. Why not rent an SUV, stock up on low priced camping gear and head into the great outdoors before it gets too cold?

Because October is a “mid” month there are several saving opportunities. Back-to-school sales are over, holiday sales haven’t begun and stores need to move merchandise to get ready for the holidays. Near the end of the month you will begin seeing pre-Black Friday sales online and in stores- these are a great way to kick start your holiday preparations. Décor, food, and gifts will be priced right!