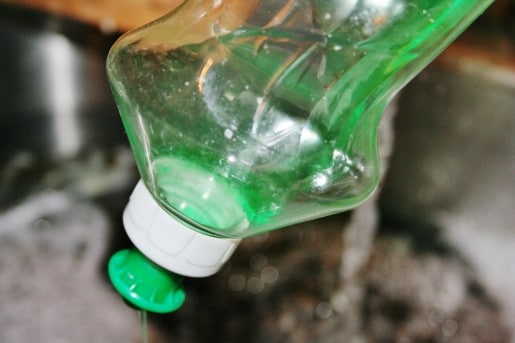 As someone who struggles with doing housework consistently (but excels at making rational-sounding excuses), it took me a while to wrap my brain around some things.

I’m frugal. It’s in my genes and wasn’t something I had to learn. But sometimes, this second-nature-cheapness skews my thinking.

For example, my perception of what it meant to not waste dishwashing liquid.

Dirty dishes used to be my nemesis. I would spend hours washing a huge pile, only to step out of the kitchen for a moment and then return to . . . another pile. And this “method” was wasting my money.

Instead of washing dishes daily, I was waiting until we were completely out. As in, not a coffee mug left to use for my daughter’s apple-juice. After a few days of individual-fork-washing, I would sigh deeply and spend hours in the kitchen, running load after load, and washing several sink-fulls of dishes.

When I started to change my kitchen cleaning routine (or, let’s be honest, develop one at all) to one of daily maintenance, I was surprised to find that my bottles of dishwashing liquid lasted much longer.

Even though some days . . . I was filling the sink with sudsy water to wash only one or two pots. This didn’t make sense to my why-waste-the-soap-or-my-time-until-we-really-need-to-wash-the-dishes brain.

Here’s the thing. When I waited (days on end) to do the dishes, it wasn’t as simple as filling up the sink and washing 40 things at once. Multiple crusty big pots had to be filled with hot water and their own squirt of soap to soak.

If supper was already on the table, it was easier to wash two cups or three forks. And of course, when you’re washing three individual items while trying not to touch the top of the pile that reaches all the way up to the faucet . . . each item gets its own squirt of soap.

By developing a routine that prevents the piles from getting too big too often, I save money on dishwashing liquid. Now, instead of one squirt of soap for each item that needs to be cleaned . . . I generally use one squirt of soap per day.

My bottles of dish soap last much longer, and I have the added bonus of a clean kitchen.

Or maybe the dish-soap-thing is the bonus.

Nony shares her personal deslobification journey at A Slob Comes Clean, where she is determined to figure out why she is this way and what she can do to change. Over the past two years, she has developed methods to keep her home in order that work for her unique Slob Brain.

Share your money-saving tip in our Everyday Savings series today!

Posted in Ways to Save Money