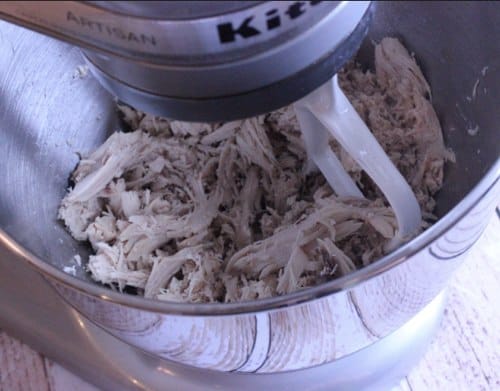 My mom purchased  this awesome KitchenAid stand mixer several years ago. You wanna know what I’ve used it for the most? Shredding meat. Yeap. It’s my cooked meat shredder.

Before I started using my stand mixer, I was using the two forks method. The stand mixer saves you so much time and shreds the meat better than your forks could ever do!

There is no real science behind the perfect shredding, but here’s what I do:

Whenever I make any type of meat that requires a sauce (like barbecue pork), I will shred the meat as stated above and then hand-stir the sauce in. If I’ve cooked something in the crockpot with the sauce, I will remove the meat from all the sauces or juice and shred. After shredding, the meat goes back into the juices or sauce to sit for a while before serving.

Also, if you plan on freezing any of the meats after shredding, add some broth or the meat’s cooked juices to the freezer bag. This will keep the meat from drying out when you thaw to use. My mother-in-law taught me that trick.

That’s it! Do you shred meat in your stand mixer?