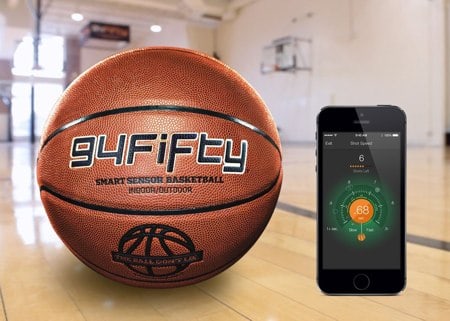 If you follow me on Instagram then you know that I’m a Sports Mom! We rarely have a weekend where we aren’t sitting in the stands. Yes, it’s crazy but I wouldn’t have it any other way. I love watching my boys play!

While Caleb plays football, he and our older son are the most serious about basketball. They play on AAU teams year-round and they are both really good if I do say so myself :). We have yet to do personal coaching for them but they attend camps and clinics and those costs can add up quickly.

In late November, my husband was at the Apple store getting one of the boys’ iPods fixed for the gazillionth time. He sent me a picture a a basketball the Apple store was selling. If it was in Apple, it meant it was a “smart” ball but I needed to do some investigating before we even considered purchasing one since it wasn’t cheap.

Turns out the 94Fifty Smart Sensor Basketball launched nearly at the same time my husband saw the ball in the Apple store (November). To sum it up, the basketball has sensors inside so it can detect just about anything you do with the ball through the accompanying app which is FREE to download in the Apple app store or Google Play store.

Since Caleb’s birthday was around the corner, we decided to purchase the ball as his gift and make it something that he and T could share (since the cost was more than we typically spend on one birthday gift).

The 94Fifty Smart Sensor Basketball is $249 on Amazon or Apple, as a special promotion for March Madness. I actually paid $295 which is the regular price. Before you balk at the price (as others have), let me share a few things.

As I said above, both of our boys play basketball seriously. They play on select teams throughout the year which means the fees per season alone is up to $500 PER child, which doesn’t include shoes and other stuff they may need (knee pads, matching socks, bags, etc). Yes, it’s expensive but it is a price we are willing to pay since it’s a sport they love.

As I also mentioned, we have considered private coaching/training. While the price isn’t prohibitive, it’s not dirt cheap either (not to mention my time in driving them to/from a trainer). Individual sessions are $50 an hour for one child. You typically go to these sessions at a minimum of once a week. If you consider the cost for two kids for 12 weeks ($100/week), that is around $1,200. Yes, that’s expensive too!

After looking into what the ball can do, we made the purchase. 94Fifty has said the ball is like a digital coach in the form of the app which means no need to hire a personal trainer. The ball alone was 1/3 of the price of a trainer and we could get similar feedback. You can keep the stats of up to 4 players so it’s also something that both boys could use and share (Andon even plays around with it). 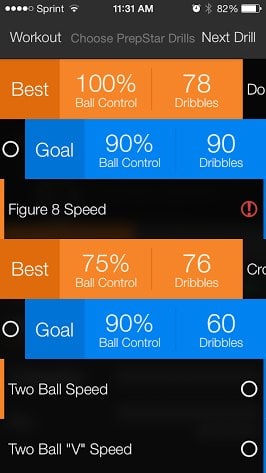 The ball’s sensors uses the bluetooth technology in your device. It works with select products for Apple and Android. Our boys have an iPad Mini, which is what they use when they are doing drills. I will also let them use my iPhone 5 at times as well. You don’t need wifi which is awesome since we don’t have wireless plans for the iPads. So they can be at a gym and use the app on the Ipad Mini.

There are several skills and drills within the app that you use with the 94Fifty basketball. Within each drill, you have a goal to work towards. If you “pass” then you can level up to get a more challenging goal. If not, you have to continue the drill until you can get to the next level.

The app/ball also detects your shooting accuracy. The ball can display your exact arc, backspin, speed and power. There is a coach that encourages you throughout the drill so you know how to adjust and do better.

You can also compete and challenge one another. We haven’t really used either of these features yet since it’s winter and the boys haven’t been outside to use either feature. 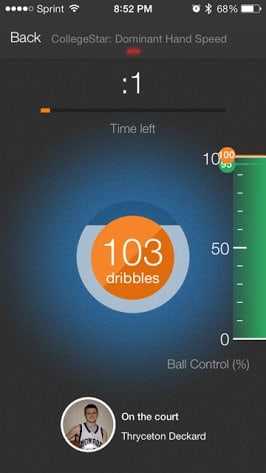 These drills are no joke! T is a Freshman and was challenged with several of the goals in the drills. He is now at the CollegeStar level and was seriously frustrated because he couldn’t a few of the drills in the previous level. It forced him to focus and try harder if he wanted to get to another level. I definitely see this as a good thing to improve skills and behavior – our boys need to know they have to work hard for what they want!

Caleb is in 4th grade and has really good ball handling and shooting skills for his grade level. However, consistency with these drills will only make him an even better player. There was one drill that Caleb leveled up before T did (who is our Freshman). This created some fun competition between the two of them to see who would get better faster.

Andon (our 6-year old) has no desire whatsoever to play basketball. However, he had fun doing some of the ball handling drills for dribble counts by hand. He thinks it’s fun to beat his personal best. 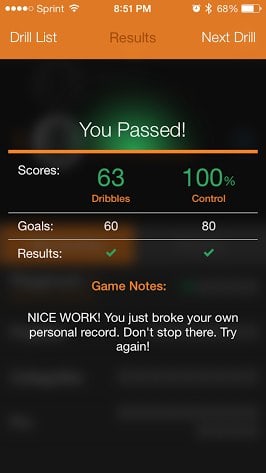 As I mentioned, this isn’t a cheap product by any means but my motto is about quality over quantity. I’m instantly saving $900 by using this versus getting the boys a trainer. Again, you can get the ball at the discounted price of $249 on Amazon right now.

Overall, I know it helps to go out and practice. I’ve had a few people tell me that’s how they got better. I respect that. I really do. But, when you have a product or tool to help you understand exactly how to get better by shooting at the exact arc, or reworking your ball handling so you can cross over a defender, that means a lot.

Will this ball replace hard work? Nope. It doesn’t claim to either. However, the ball may motivate your kids to work harder because of the challenges in the app. And for that alone, it’s worth it for us.

Disclosure:  After purchasing the ball, I had a few questions and talked with the CEO of the company. Long story short, I’ve started to work with 94Fifty on a few projects. I’m only sharing this because the ridiculous FTC laws. However, I purchased this MYSELF and this review is all purely based on our boys’ PERSONAL experience.

This post contains a link to an affiliate and support this site. See my Disclaimer Policy for additional information.