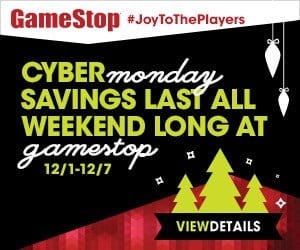 The Cyber Monday Deals at GameStop be valid on Monday only. However, they have other sales running on the site throughout the week.

Here is a roundup of the hot Monday only deals:

Disclosure: This post contains a link to an affiliate and support this site. See my Disclaimer Policy for additional information.